With great sadness, we announce the passing of Michael Kainer on May 25, 2020 in his 98th year, current resident of Cranbrook, British Columbia.

Born on September 1,1922 the youngest of 13 children on a farm near Vibank, Saskatchewan to parents Anton and Anna, who had arrived in 1897 from Zichydorf, Hungary to homestead in Canada, Mike grew up in a wonderful family distinguished from its neighbours as Sabbath Keepers on a farm made prosperous by the hard work and intelligence of all members of his large family. Mike’s love for the prairie is captured in the autobiography he wrote at age 70 as a gift to his children. In loving detail, he describes the idyllic landscape of the time with its multiple varieties of wildflowers, edible berries, trees teeming with birds and broadcasting a never-ending symphony of song, the massive herds of buffalo that took all day to cross the farm. Wishing that all children could be so lucky to have grown up in such a place, Mike remarks throughout his life story that in many ways he had lived a charmed life.  After recounting moments of good fortune, he includes a refrain which also ends his book: “Yes, Virginia, there really is a Santa Claus.”

Survived by his wife of 73 years, Neva Dorene (Ickes) Kainer, six children, 14 grandchildren, and 11 great-grandchildren, Mike’s long and remarkable life spanned a dizzying succession of distinct ages from the horse and buggy era to the Great Depression, World War II—when he engaged in active service as a quartermaster in Canada’s Merchant Navy—space exploration, and the Digital Age. Having obtained degrees in Arts and Education after the war, Mike excelled at the work he did for most of his adult life as an elementary school teacher and principal. But being a man blessed by intellectual curiosity, wit, good humour, and intelligence, Mike worked many jobs; was an avid reader; followed current events, politics and history; took a keen interest in sports both as a participant and observer; travelled often with his wife and children to campsites and to visit relatives, and demonstrated his love of nature throughout his life in landscaping the yards of the family homes in Saskatchewan, Tennessee, Ontario, and British Columbia.

Mike was the undisputed head of his family; his wife, Neva, the glue that held the family together. His autobiography conveys how hard they both worked at jobs and at home to make ends meet and to ensure a decent life for their family. All their children excelled at school, played a musical instrument, obtained post-secondary educations, and whether by fluke or design, learned the importance of sharing, cooperation, and industry for the sake of the common good rather than for individual gain. Much loved, he will be much missed.

The onset of the COVID-19 global pandemic prohibits the family from holding a funeral or gathering to grieve and remember Michael at this time. At a later date, his ashes will be taken to Saskatchewan and buried in the prairie landscape that he so loved and called home. 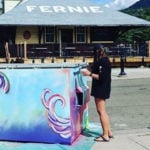