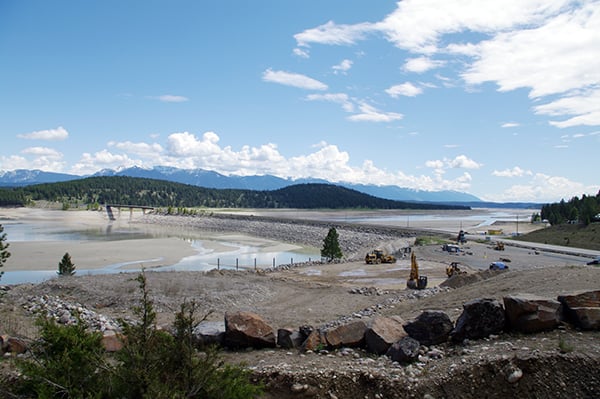 Current snowpack levels across the Kootenay (spelled Kootenai in America) River Basin are above normal for this time of year, contributing to above-normal spring runoff forecasts on both sides of the border.

Operations of Libby Dam are coordinated under the Columbia River Treaty to provide flood risk management for the U.S. and Canadian portions of the Kootenai River Basin.

Cooler temperatures and precipitation in early May have maintained the snowpack across much of the basin, while some snowmelt has begun in lower elevation areas. Based on this runoff information and planned reservoir operations at Libby Dam, the latest projections indicate a 17 percent chance of exceeding flood stage at Bonners Ferry, Idaho, which is 1,764 feet.

While unusually high spring rainfall may increase flood risk, there is currently a low likelihood of river stages at Bonners Ferry, reaching levels seen in June–July 2012, when the river peaked at 1,766.5 feet. Flow and stage projections are based on National Weather Service ensemble forecasts and are updated frequently during runoff season. To see the latest forecast modeling for Libby Dam operations, visit: http://1.usa.gov/1kP1lSH.

On the Canadian side, BC Hydro drafted Duncan Reservoir to its minimum reservoir level in late April, and the reservoir recently began to gradually refill. Releases from Duncan Dam into Kootenay Lake will be reduced to minimum during the peak Kootenay Lake inflow.

FortisBC and BC Hydro have coordinated operations to maximize the discharge from Kootenay Lake (limited only by the channel restriction at Grohman Narrows) since mid-March, and this operation will continue until after the lake level has peaked (likely in June). Due to the above- normal snowpack conditions, the peak Kootenay Lake level in 2014 also is expected to be above normal, with a 20 percent likelihood of reaching 1,752 ft. At this time, there is a low likelihood (less than 3 percent) of the lake level reaching 1,753.8 ft. (peak level in 2012).

The Corps of Engineers and BC Hydro will host public meetings in the basin during the last week of May and early June to discuss planned reservoir operations.

The first meeting will be held on May 28, from 6 to 9 p.m., at the Baynes Lake Community Centre (468 Jaffray Baynes Lake Road, Baynes Lake).

The third meeting will be held on June 9 in Eureka, Mont. at the Lincoln Electric Cooperative (500 Osloski Road, Eureka, Mont.) from 6 to 8 p.m.

Lead image: Koocanusa Reservoir at the Kikomun Bridge as of May 20, 2014. Ian Cobb/e-KNOW