The detachment received 128 calls for service throughout that period.

Three collisions / one hit and run. Regarding the hit and Run incident; one person charged under the Motor Vehicle Act .

One collision involved an ATV; minor injury and person charged for having uninsured ATV on highway.

Both collisions involved two vehicles, some damage/minor to no injury. Offending drivers charged in both incidents.

One break and enter occurred at Kal Tire where four sea cans were broken into and an undisclosed amount of tires were stolen. The incident occurred the weekend of April 23/24.

There was also a break and enter to a residence. It appeared nothing was stolen from inside residence, possibly two bicycles stolen from yard. 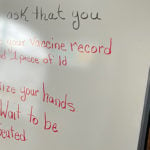