Local stage/theatre members, aficionados, volunteers and fans gathered at Key City Theatre on Sunday, May 27 for the inaugural Abbott Awards.

Named after local legend and Cranbrook Community Theatre (CCT) founder Bud Abbott, the Abbott Awards are designed to celebrate the dedication and hard work of everyone who brings community theatre to the East Kootenay.

On May 12, all CCT members received an email with their ballots to vote on the categories awarded as well as a vote for ‘Volunteer of the Year.’

Hosted by CCT and Key City Theatre the free admission evening featured sneak peaks of upcoming performances, a silent auction and a host of well-earned awards.

And the winners are:

See more photos posted by Key City Theatre on May 28 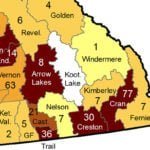