Home » Coping with depression, college instructor aims to help others Coping with depression, college instructor aims to help others Kevin Szol is an instructor in the Electrical foundation and apprenticeship programs at College of the Rockies. He is also one of the 3.2 million Canadians that experience at least one major depressive episode in their lifetime.

Looking back, Szol believes he had his first experience with depression at the age of eight. He first sought help when he was in his mid-twenties and has been battling for his mental health ever since. It was not until his latest major depressive episode, in 2016, that the pieces began to fall together for him.

Having been prescribed increasing dosages of an anti-depressant medication, he eventually ended up in the hospital, suffering from strange sensations and visual disturbances. He was diagnosed with Serotonin Syndrome, a group of symptoms brought on by a high level of the chemical serotonin in one’s body. It can be caused by increasing the dose of a medication that boosts serotonin levels.

After being fortunate enough to have his care transferred to Calgary, Szol’s new team of doctors focused on getting his physical health back on track before they began the work of addressing his depression and anxiety. Some of what he discovered surprised him.

“At the age of 55, I was diagnosed with ADHD (Attention Deficit Hyperactivity Disorder),” Szol said. “It turned out what I thought was anxiety, and what was being treated as anxiety, was actually one way in which my ADHD presents itself.” Though he believes other biological and environmental factors likely contribute to the episodes of major depression he has experienced, he also feels the ADHD plays a part.

“I would beat myself up because I wasn’t able to focus, I would bounce from job to job, and I thought that was my fault,” he said. “Getting diagnosed with ADHD made a lot of other things in my life make sense.”

Throughout his adulthood, Szol has endured many episodes of major depression, each event becoming darker and deeper than the previous one. He has been at risk of suicide and of self-harm. For a short time he abused alcohol. He was not the husband and father he wanted to be.

After recovering from Serotonin Syndrome, Szol had the benefit of seeing some of the best psychiatrists and psychologists in Canada. Better understanding the contributors to his depression, he was in a better position to battle against it.

Medication and cognitive behavioural therapy (CBT) are a part of that fight but, feeling he needed more, Szol took it upon himself to create a tool to aid in his own journey.

Szol created an eight-sided model as a reminder to focus on the things that challenge his negative thinking: his values, commitment, purpose, vigilance, connections, acceptance, supports, and action. It is this last item – action — that Szol emphasizes.

“You have to make changes internally. You need to be aware, you need to act, and you need supports,” he said.

Szol credits his support system, which includes his wife of 36 years, with helping him to keep going. However, he is hoping to see local support group develop where individuals struggling with mental health issues can discuss their experiences in a safe environment.

He also hopes, by sharing his story, he can help to erase the stigma around mental illness.

“Mental health is one of those pieces of our societal puzzle we don’t want to talk about. It’s uncomfortable because we don’t understand. And that makes us fear it. I don’t want people to be afraid to go to the doctor to get help,” he adds.

Szol encourages anyone feeling depression to speak to their doctor, but to also do their own research.

“If you are taking a medication, go onto the manufacturer’s website,” he said. “They post all of their information there on side effects, appropriate dosages, etc. That can help you to ask important questions of your doctor.”

“Nothing outside of you changes,” he added. “People caught up in depression can be supported, but they have to decide on their own that change has to take place within. Doctors can help with medication and referrals to therapy. However, my experience has been that wellness has to happen by intention. I had to own my depression in order to work toward getting better.”

Diagnosed with Persistent Depressive Disorder, Szol knows he will need to be vigilant about his mental health for the rest of his life. Sharing his story is part of that journey. He has talked about his experiences with students in the college’s health programs, and offered a public presentation open to all college students and staff.

His hope is that from hearing his story, at least one person will get the help they need.

“There are resources all around us,” he said. “Reach out to your family doctor, your clergy member, the Canadian Mental Health Association – Kootenays, or see if your employer has resources through an Employee Family Assistance Program. It doesn’t matter who you reach out to, it’s just important to reach out.” 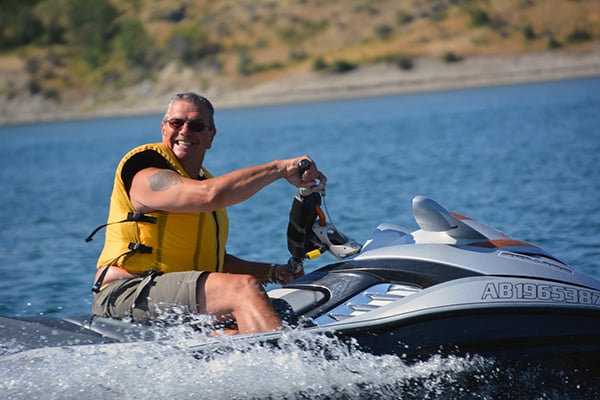