I have never read this author. A lady gave me the book while I was sitting in the sun at Hot Shots, reading and drinking coffee – definitely two of my favourite things to do. This is Pearson’s eleventh novel, so he should have worked some of the kinks out, and besides, the woman was enthusiastic about the book. I, in turn, immediately liked the fact that Pearson recognized and thanked three of his mentors who had recently passed away. There is always room for respect in everything that we do. I was surprised to find that this novel is set in Seattle, Washington. That is familiar territory to many here in southeastern B.C. The focus of this story is multiple child kidnappings. Being a father of two daughters I don’t like kidnapping stories much. The fears have, at times, been my own reality.

Pearson does tell a good story. His characters are well-developed, rich and strong. He moves the action around, giving in-depth views of several parts of the U.S. He has enough pathos, sex and deep human emotion to keep almost any reader interested. For me, one of the most intriguing parts of the story is the way Pearson makes Louisiana out to be a foreign country. Most legal work is negotiated there as personal favours. Money and connections make anything possible, in prison or outside.

In the end I wanted more – more engagement with the real world of corporate power and political manipulation. Ridley Pearson is a good writer and I will probably read more of his novels at some point. He does not, however, have the social analysis that the Scandinavian writers inject into their stories, and I miss that.

REALTOR – “How do I do it?” she asked, chewing on a wry smile. “Okay. Obits, of course. Sure. Divorce filings can be a gold mine. I get a lot of play out of the divorce market – the separation filings are registered downtown. Early bird gets the worm. Construction permits are a good source; couples often fix up the house before trying to sell, or they start work on a future home before committing to listing the existing one. Tricks.”

HABITS – LaMòia had never smoked. He drank beer, but only socially. He had been blind drunk twice in his life, and had hated the lack of control. But at that moment he envied the habitual, whatever the vice, because it gave the person a preoccupation, an object of distraction.

SEATTLE – …cranes and Caterpillars and jackhammers all busy making the population deaf. The city refused to stop growing. Unable to spread out, it grew up now, the new buildings pushing higher and higher into the sky, winning views of the bay and blocking the view of others. The streets closed in around the pedestrians. The town of Seattle was gone, a city having replaced it.

THE BIG EASY – Boldt failed to see the romance of the French Quarter. For years he had heard stories about the mix of French and black cultures, of voodoo, umbrella drinks, of Creole bar girls with bodies like centerfolds, of blues and jazz drifting onto cobblestone streets at three in the morning, and fresh oysters the size of golf balls. Instead, he saw only a giant tourist attraction, a Disneyland for alcoholics and unfaithful husbands masquerading as conventioneering businessmen. 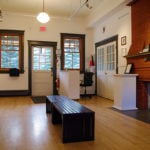