On June 1, B.C.’s lowest paid workers will get a pay boost, with the general minimum wage increasing to $15.20 an hour and the lower discriminatory minimum wage for liquor servers ending.

Over the past four years, B.C.’s general minimum wage has increased from $11.35 to $15.20 per hour. It has benefited close to 400,000 British Columbians over those years – the majority of whom are women, immigrants and youth.

“In 2017, our government made a commitment to increase the minimum wage to $15 an hour by June 2021, through regular, measured and predictable increases,” said Harry Bains, Minister of Labour. “As of tomorrow, we will have achieved – and surpassed – that goal, making sure workers who need regular and fair wage increases are getting them.”

“About 80% of liquor servers are women, and the low liquor wage is a clear example of the gender pay gap we are fighting to eliminate,” said Grace Lore, Parliamentary Secretary of Gender Equity. “Most minimum wage earners are women, often racialized women and newcomers who face barriers to accessing better-paying jobs. We need to work towards wages that workers can actually live on instead of being held back by.”

When this work began, B.C. had one of the lowest minimum wages in the country but was one of the most expensive places to live. B.C. now has a minimum wage that is the highest of any province and starting next year, the increases for minimum wage will be tied to inflation.

The gradual increase of the minimum wage over four years has given businesses time to prepare for each increase, offering them stability and certainty. The pandemic has presented unforeseen challenges over the last year, but the province continues to support and assist those companies that have been impacted. B.C. currently leads all major provinces in job recovery, a Ministry of Labour media release stated.

As of June 1, the minimum wage rates are increasing as follows: 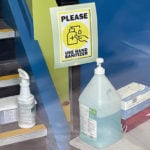