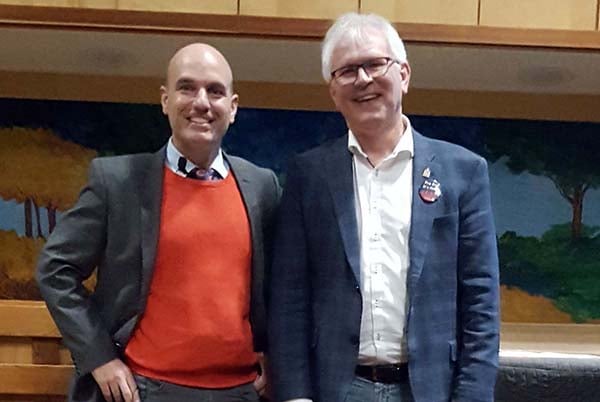 An audience of more than 80 people in the Nelson United Church listened as Cullen, the federal NDP’s critic on democratic reform, outlined issues around federal electoral reform, noting that the Liberals backpedaled on Trudeau’s promise to make 2015 the last election under Canada’s first-past-the-post electoral system.

“The NDP has long campaigned to end Canada’s outdated, unfair, first-past-the-post voting system and replace it with one that is fair, representative, and proportional, and where every vote is counted equally,” Cullen said in a NDP press release.

“Making every vote count is the best way to enshrine true democracy in Canada,” added Stetski, MP for the Kootenay Columbia riding. “We all felt betrayed when the Liberals walked away from their promise to make 2015 the last first-past-the-post Federal election. It’s important that we all do our part to ensure proportional representation is in our future.”

Cullen also outlined three major areas of concern with the proposed expansion of the Trans Mountain Pipeline, which has long faced opposition from constituents in his northwest B.C. riding.

Cullen reminded those in attendance of the significant costs that the Justin Trudeau Liberal government incurred on behalf of Canadians in purchasing the 65-year-old Kinder Morgan Trans Mountain pipeline for $4.5 billion last July.

Kinder Morgan made a $1.2 billion profit on the sale, which included $1.5 million in bonuses for their executives. The NDP MP emphasized the fact that newly released documents reveal Kinder Morgan estimated the cost to complete the pipeline at $9.3 billion. The total financial cost to Canadians, if the project goes ahead, would likely exceed $15 billion, including interest, adding as much as 36 per cent to Canada’s deficit.

“We believe that $15 billion could be better spent on alternative energies, or clean drinking water for all Indigenous reserves,” said Cullen. “Prioritizing fossil fuel subsidies that will ultimately jeopardize future generations is disappointing and Canadians deserve far better treatment from their government.”

If allowed to proceed, expansion of the pipeline would triple its capacity, significantly impacting carbon emissions and increasing the size and number of oil supertankers on British Columbia’s West Coast from five to 34 each month, the media release noted.

The City of Vancouver has projected an 87% chance that an oil spill will occur over the next 50 years. The financial cost to clean up a major spill has been estimated at $9 billion. Canadian taxpayers would be liable for the cost. Cullen also noted that cleanup of a spill is usually considered “successful” when just eight percent of the spill has been collected.

Expanding the pipeline also ignores the right of Indigenous Peoples to say no to a project affecting their territories and resources. Many indigenous groups in northwest BC are opposed to expansion of the pipeline due to the risk it poses to their traditional lands. They are disturbed at the lack of meaningful consultation carried out by the National Energy Board during its review process, the Sept. 30 release stated.

Stetski and Cullen applauded the recent unanimous Federal Court of Appeal decision to suspend the expansion of the Trans Mountain Pipeline due to serious flaws with the environmental assessment process.

“The decision made clear that the government did not properly consult Indigenous peoples or accurately assess environmental risk,” said Cullen. “Trudeau made a clear promise to properly review this pipeline and to meaningfully consult Indigenous groups. Instead the Liberals went ahead with the same failed approval process inherited from Stephen Harper.”