Is Canada a forgiving country? I guess before this wretched election is over, we’re going to find out because the only way Justin Trudeau is going to triumph Oct. 21 is through an act of forgiveness virtually on a national scale.

And the odds in his favour don’t look good.

Of course the Liberal Party, especially the ones running for office in this miserable election, have given Trudeau his get out of jail free card already much like Republican party members to the south of us have twisted themselves into human spaghetti to justify the abhorrent machinations of Donald Trump, who in a Twitter outburst earlier this year called Trudeau “very dishonest and weak.” Or was the White House bully merely making a point?

Depends on your politics, I guess. Certainly Trudeau sounded contrite as he faced the jackals of the media shortly after Time Magazine published the black/brown face picture of him smirking into the camera at an “Arabian Nights” themed costume party in 2001 at West Point Grey Academy in Vancouver, where he was a 29-year-old teacher. Apparently, this wasn’t the first time Trudeau smeared black colouring on his face as a picture of him appeared on Twitter within two hours showing his darkened countenance as he performed Harry Belafonte’s Banana Boat Song “Day-O” at a talent show when he was a teenager in the late 1980s, according to a National Post story Sept. 20. Global News followed this one up with a short video from the early 1990s when Trudeau again appeared in painted skin and a black wig and stuck his tongue out at the camera.

But Liberal party members defend Trudeau, including members of colour who point to his support for immigration, diversity, the LGBT community and other marginalized groups. “I know him in a completely different way,” said Defence Minister Harjit Sajjan, a turban-wearing Sikh.

“These photos from 20 years ago are not the person I’ve worked for in the last four years,” said Randeep Sarai, a Liberal candidate running in Surrey Centre.

But just who is Justin Trudeau?  He’s a Canadian aristocrat for sure and one from a privileged family, who has never rubbed shoulders with the great unwashed and likes to put on exotic clothing when he travels. It’s a rhetorical question, but you have to wonder if he’s ever worked up an honest sweat about anything, least of all a real job outside of  classrooms where they allow people to wear funny clothes.

I remember the last time he came to Cranbrook and spoke in Rotary Park with his brown locks messed up just right, his blue jeans torn below his knee and a leather belt that made him look like ordinary folk. The crowd was charmed but is this man a genuine charmer or just another politician sniffing out your vote?

We know he’s good at apologizing for the transgressions of others, but not himself. He used legislative trickery to hoodwink the Canadian public to help SNC Lavalin avoid criminal charges while throwing two of his best cabinet ministers under the bus for calling him on it. He has tried to dupe Canadians into believing the Conservatives will outlaw abortion, a claim that Conservative leader Andrew Scheer vehemently denies and didn’t happen in the 10 years Stephen Harper was in power.

Trudeau did offer an apology for his blackface behaviour but had the gall to blame it on his wealthy background. “I didn’t understand how hurtful this is to people who live with discrimination every single day. I have always acknowledged that I come from a place of privilege but I now need to acknowledge that it comes with a massive blind spot.”

In light of hypocrisy as blind as this, I’d respectfully suggest Trudeau needs a new pair of political glasses.

– Gerry Warner is a retired journalist, who cleans his political glasses daily. 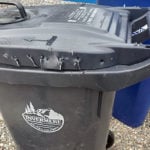