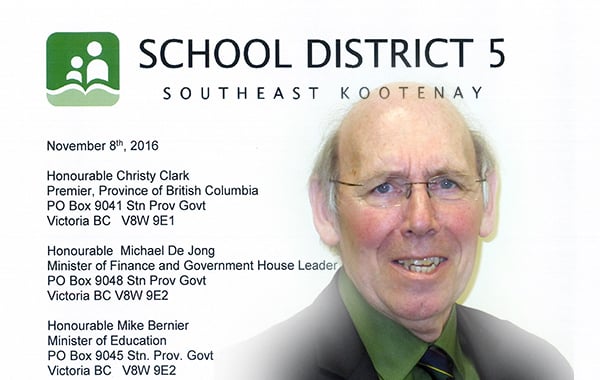 The School District No. 5 (SD5), Southeast Kootenay Board of Education is deeply troubled over the recent firing of the Vancouver School Board (VSB), saying it is a huge blow to democracy and to the parents of Vancouver who rely on the VSB to advocate on behalf of their children.

Education Minister Mike Bernier fired the VSB on October 17 for failing to comply with the School Act, which requires all Boards of Education to adopt a balanced budget by June 30 of each year. This legislation was signed into law in 2002 under then-Minister of Education, Christy Clark.

The VSB –while symbolically refusing to sign off on their balanced budget—had in fact been following the budget and had implemented all cuts contained in the budget, SD5 pointed out in a press release and Nov. 8 letter to Premier Clark, Bernier and Minister of Finance Mike de Jong.

On Friday, October 14 the VSB announced it was prepared to finally sign off on their balanced budget at a meeting scheduled for the evening of October 17, thus ending their “protest” against what they believe to be inadequate government funding. The morning of October 17, just hours before the budget was to be signed, Minister Bernier fired the board, SD5 stated.

SD5 Board Chair Frank Lento says that, given the historical conflict between government and the VSB, coupled with the timing of the firing, his board believes that “non-compliance” was not the reason for the VSB firing, but rather the only legitimate excuse available to government to fire the VSB.

“We feel it is a sad day for democracy when a government chooses to use the blunt instrument of legislation as its first and only recourse when in disagreement with the political views or advocacy work of a duly elected Board of Education,” Lento stated the letter sent to the Premier and two cabinet ministers.

Lento pointed out that in other systems of shared responsibility, there are dispute mechanisms or appeal procedures in place to resolve conflicts between parties.

“While this approach requires time, intent and process, it is far more successful at restoring working relationships and maintaining the public trust than tossing one’s weight around,” he said.

“But, rather than doing the difficult job the public elected them for, by working toward an effective resolution, government chose to ignore the democratic process, ‘hit the easy button’, and throw an entire community of students, parents and staff into turmoil.”

Lento likens dispute resolution to the act of parenting. “When a parent and child are at odds, it’s unlikely that the parent will simply remove the child from the family. Instead, parent and child engage in dialogue to resolve –or at least minimize—the conflict between them, even if that means similar conflicts may arise in the future,” he said.

Lento also points to the collaborative practices Boards of Education engage in with schools, unions, members of the public and district management when dealing with conflict, and in the development of a yearly budget. “Itʼs equally incumbent upon government to respect the democratic process and to work collaboratively with elected Boards of Education as co-governors of public education.”

In Lentoʼs letter to government, the board requested government implement restorative processes and procedures geared toward resolving conflict and giving equal representation from the education co-governance partners (the MoE and BCSTA) while respecting differences and the democratic process.

“We also requested that the MoE immediately call a by-election, an act which would rightly restore democracy to the citizens of Vancouver,” he said.

View the boardʼs letter to government.

View the petition of Vancouver parents for the restoration of the VSB.