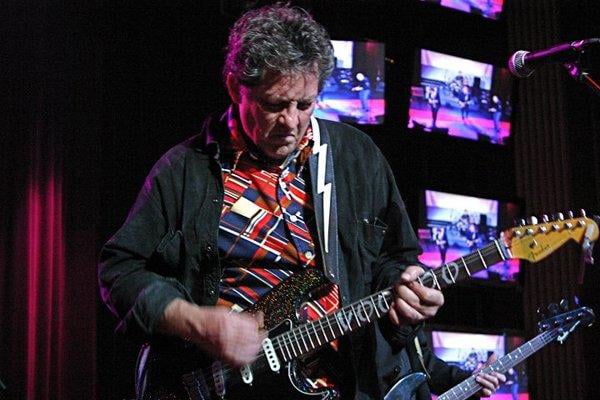 The first concert of this year’s Live at Studio 64 fall series will bring back to Kimberley the Calgary blues band, Alittle Voodoo.

Last seen and heard at Studio 64 in October 2015, Alittle Voodoo has been fairly quiet of late, due to the pandemic restrictions on audience size at indoor concerts.

To make possible this concert in Kimberley on September 25, Kimberley Arts Council has moved the venue outdoors to the Centre 64 outdoor concert site alongside the arts centre. This will allow an audience of 70 to attend.

To purchase tickets go online to kimberleyarts.com as there will be no tickets sold at the door. Live at Studio 64 committee chair Keith Nicholas reports that ticket sales are going well so don’t hang about.

Alittle Voodoo first came to public notice in 1992 when the band began playing across Western Canada. By 1993 they had recorded their first live CD at Banff’s Rose and Crown pub.

The band is led by frontman Ron Burke on vocals and guitar (pictured above). He has been likened to Stevie Ray Vaughn, Johnny Winters, and other well-known guitar-vocalists. Burke’s animated vocals and screaming guitar-playing make it hard to take your eyes off his performance. In 1994, the band was recognized at the CJ92 awards with Best Band of the Year, Burke also taking the honours as Best Male Vocalist and Best Guitar Player.

Bass guitarist Tommy Knowles has appeared at Studio 64 on more than one occasion. He began playing with the late Long John Baldry and has shared the stage with other music legends such as Jimmy Page, Tom Jones, Crowbar, Kathi McDonald, and Blue Cheer. Rhythm man Rob Vulic on drums and Geoff Brock on guitar round out the quartet.

One of the band’s most recent gigs was to headline a fund raising show to save the Blues Can venue in Calgary.

When Alittle Voodoo played Studio 64 in 2015 this reviewer wrote, “This was blues that veered into heavy metal with the kind of electronic vibes reminiscent of Jimi Hendrix. Ron Burke….. couldn’t have been more animated. It was hard to tear your eyes off him as he twisted his body and tortured his guitar into some of the most pounding, screaming blues this writer has heard in some time. It was a magnetic performance, one that overshadowed the excellent bass guitar rhythms of Tom Knowles and the steady drum support from Ron Vulic, both class musicians in their own right but merely background to this performance. Alittle Voodoo on this night was pure Ron Burke.”

Alittle Voodoo will be followed on Friday, October 22, by Victoria’s acclaimed and award-winning gypsy jazz trio, the Marc Atkinson Trio, and on Saturday, November 27, by the Yukon’s multi-instrumentalist Gordie Tentrees and his sideman.

Tickets are $33 per show, $30 for members of Kimberley Art Council, or $90 for the three-concert series, $80 for arts council members.