A driver was checked and officers found he had four outstanding arrest warrants. He was returned to the detachment and the warrants executed. In addition, he was served a Driving Prohibition on behalf of the Superintendent of Motor Vehicles, issued a violation ticket for No Driver’s License and his vehicle was impounded for seven days, reported Sgt. Chris Newel, Kimberley RCMP Detachment commander.

Later, at the same check, a driver approached and the officer noted an odour of alcohol. The breath demand was read and two samples obtained. The result was a warning so his driver’s license was prohibited for three days and his vehicle impounded.

On December 9, officers conducted a check again on Highway 95A just east of Kimberley. A driver tried to avoid the check but was located a short distance away. Again, signs of alcohol consumption were noted. The breath demand was read and samples obtained. As a result, the driver was issued a 24-hour driving prohibition.

Three other 90-day driving prohibitions were issued over the weekend.

One occurred in the early evening of Dec 6 after a complaint was received about a subject having balance issues. Officers followed up and found him behind the wheel of his vehicle ready to drive away, Sgt. Newel said.

Just after midnight on Dec. 8 an officer noted a vehicle being driven in an odd manner. The officer checked the driver and noted a strong odour of alcohol. He conducted an impaired driving investigation and as a result the woman was served a 90-day driving prohibition and her vehicle impounded for 30 days.

In the early morning hours of Dec. 9 a vehicle was stopped on Rotary Drive for having his off-road lights on. A strong odour of alcohol was detected and after obtaining two breath samples the driver was issued a 90-day driving prohibition and his vehicle was impounded for 30 days.

On Saturday night a male was arrested on three outstanding warrants from Kamloops and one from Kimberley. He was held in custody for a bail hearing, Newel concluded. 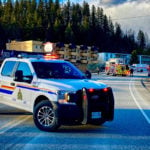