Once more into the fray.

District of Invermere council had another full gallery at its regular meeting April 3, with the topic of moving the Invermere Farmers’ Market (IFM) back on the agenda.

At the March 12 meeting, council voted to deny a request by IFM coordinators (the Royal Canadian Legion Branch No. 71 Windermere District) to move the market from its long time location on 6th Avenue to the Lakeview parking lot after some vendors spoke against the move citing, among other concerns, a lack of communication.

Council did not deny the move entirely, recommending instead the move be considered for the 2020 season instead and encouraging the Legion to meet with vendors and work together.

After a letter requesting reconsideration from the Legion and a presentation by Ken Carlow, co-manager of the IFM, council ultimately changed its decision to allow for the move this summer.

“As discussed with Mayor (Al) Miller and yourself we decided to go with an open meeting regarding Invermere Farmer’s and Artists Market March 27, 2019,” the letter stated.

Carlow said they undertook a meeting with interested parties March 27; doing a parking analysis as well as responded to concerns regarding potential noise from one business owner.

In terms of parking, Carlow said there would be eight fewer stalls used in the new location and configuration than in previous years.

“Over all there would be a reduction in impact (on parking),” he said.

At the March 27 meeting, attended by about 50 people, Carlow said that 80% of the 41 who took part in an impromptu vote said they were in favour of the move.

Carlow added they had numbers from an on-line poll and several emails which he said also indicated a majority in favour.

Jamie Chillibeck and Sophie Timothy, both long time market vendors, attended the March 27 meeting, but said they feel the numbers quoted by the Legion were not truly representative of the vendors.

”First, I do want to say thank you to the Legion for all their hard work that has gone into planning out this move. I also want to make it clear that I’m not saying we should throw their hard work in the garbage. I just want to make sure that everyone is fully informed on this decision and we make it as a town,” Chillibeck said.

“The first meeting we have ever had with the Legion took place on March 27. It consisted of roughly 15 vendors, three to six merchants (from who we could recognize) and a handful of town members, with a total of roughly 60 people. It seems out of 160 applicants, 110 vendors, 20 plus shop owners in town and over 3,000 plus town members, there was simply not enough participation to get an accurate representation of what people want. We had hoped to discuss and work together with the Legion at this meeting and moving forward.”

Chillibeck said rather than a hoped for discussion, their concerns were minimalized and ignored.

“No one expected a vote,” she said. “We were hoping to talk and work together. Instead what followed was more of a unilateral action intended to minimize or even eliminate an oppositional view point.”

But while Chillibeck and Timothy both said they felt there was not enough consultation with vendors, one vendor at the meeting felt otherwise.

Shannon Root has been a vendor at the IFM for three years and said she is in support of the move.

“I disagree that there was no notice,” said Root. “Last summer there was informal contact, so I was not taken by surprise. I hate change, but there are more advantages (to this move).”

Root added while she does support the market growing, she is glad there will be a cap on number of vendors.

Rick Tegart, also a vendor, spoke in favour of the move as well.

“Many vendors that attend are business owners and operators themselves, especially us farmers,” Tegart said. “I think the better the flow, the better we do. I am speaking in favour of the move.”

Another vendor expressed he was torn, that part of him liked the idea of the move, but part of him was worried about losing the current charm of the market. 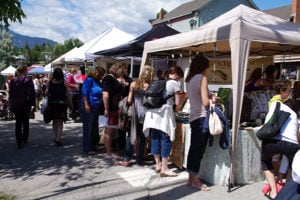 Ivan Mackey spoke as a vendor as well as a (now retired) 17-year veteran of the Invermere Fire Department.

Mackey’s concerns were around emergency vehicle access with the market as congested as it has become.

Mackey added that even an ambulance would have trouble reaching someone requiring it.

Council voted unanimously to approve the move for this season, with a proviso that if the IFM organizers feel mid-way through the season it is not working out, they can move back to the original location.

While she is still concerned that this move has been rushed, Chillibeck said after the meeting she is going to take as positive an attitude as she can and help work towards success in the move.

“I offered to volunteer any time for any setup days, so as to help things run smoothly but I have not heard back (from the Legion),” she said. “Let’s hope it’s going to be a good move, my livelihood depends upon it.”