Destination BC was established on Nov. 2, 2012, under the Business Corporations Act. The legislation introduced enables its funding framework. For the first year of operations the Crown corporation will receive the full funding that government has used for tourism marketing.

The legislation provides that, beginning March 31, 2014, funding will be a portion of Provincial Sales Tax revenue attributable to the tourism sector, which meets Premier Christy Clark’s commitment and gives funding certainty to the tourism industry. The specifics of the funding model will be set out in the regulations. Government will work with the tourism industry during 2013 to develop an appropriate formula that recognizes the sector’s contribution to Provincial Sales Tax revenues.

“Our goal is to increase tourism revenue to $18 billion per year by 2016. In order to achieve that goal we are listening carefully to industry operators, who know better than anyone how our province should be marketed abroad. I would like to thank the members of the Tourism Industry Association of BC PDMO Task Force in their determination to create an organization that is truly their own. We’re enshrining their vision in law in order to provide stability and transparency so B.C. can compete with the best on the world stage,” stated Pat Bell, Minister of Jobs, Tourism and Skills Training and Minister Responsible for Labour in a press release.

Once funding is based on a portion of the Provincial Sales Tax, Destination BC’s revenue will increase as tax revenue increases, and decrease if tax revenue decreases.

Destination BC will take full responsibility for operations on April 1.

* The 2012-13 Ski Marketing Campaign, “Ski It To Believe It”, continues in long haul destinations such as Ontario, Washington State and California. Developed in collaboration with the Canada West Ski Areas Association, the campaign runs through March and has a budget of $1.55 million. 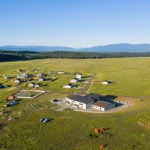